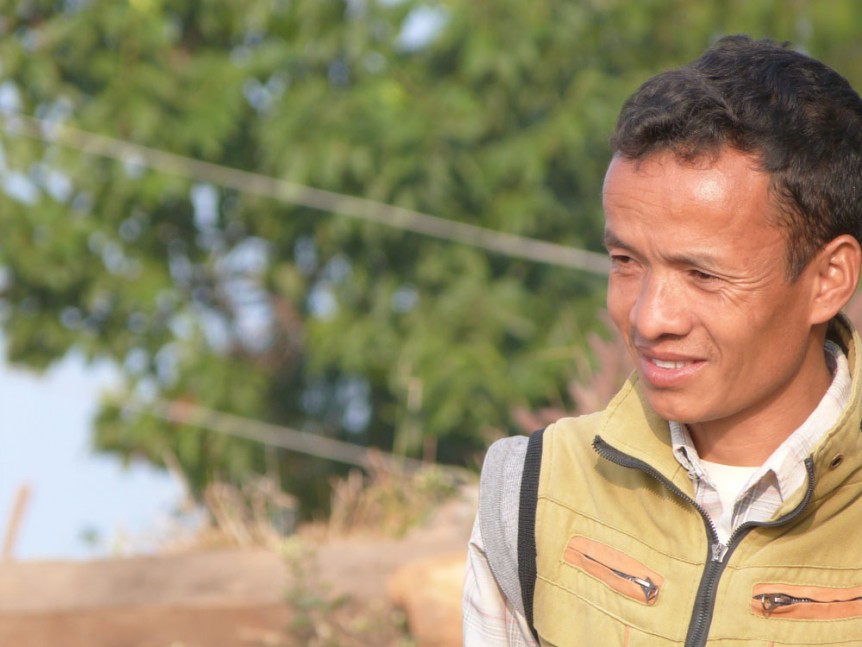 Having written my last blog about myself, I wanted to make this next blog about the people of Nepal. The people who have so captured my imagination and warmed my heart.

The devastation of the earthquake is hard for me to comprehend. The fear of losing your life or losing your loved ones in a moment at the will of the mighty Himalayas and your life living in the laps of the gods. Religion is big here, I’m not a religious man. I don’t have a faith in that sense. Western life makes me more scientific in my beliefs yet to have a belief that someone is watching over you is understandable in this country. But religion doesn’t define the Nepalese.

They are the happiest people I have met. When speaking to people about what they have lost they almost shrug and laugh about it. They know that life doesn’t stop and that you must rebuild. Imagine losing everything you own and having the strength to smile and look to the future with hope. Imagine how tough we would find that process. There is no councilling for this here. Only communities pulling together sharing their grief and their hopes for the future.

Let me tell you about a few people I have met. 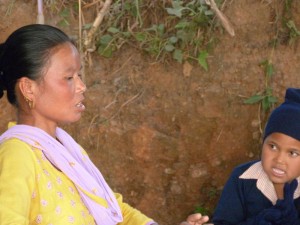 Lalima’s husband is also a teacher in a school far away from the village. They need the income to save and rebuild, so they see each other seldom. Lalima is a kind women with a warm smile. That her husband was so far away working so hard to improve their lot. It must be lonely for her.

She was up early each day and last to bed. Immaculately turned out each time we have met. A good cook who makes a lovely kidney bean curry.  Her home is a small tin room. 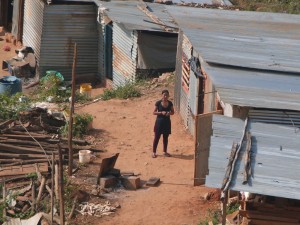 Her husband has gone to Qatar to earn a good wage working in conditions which have occasionally been described in the western press as being like slavery. His story I know little of apart from last year he had sent a years wages home. With this and a loan Ram Maya built them a new home. Two months later the home was destroyed in the earthquake. She is left only with a big loan she needs to pay back. Her husband didn’t even see the house.

If you didn’t know her story then you wouldnt know that she had suffered so much. She is a very determined woman and has been working hard to improve her community and the living standard of everyone in it. Through the cooperative she is bringing the community together to develop and grown the community. We have her full support and she will be key to making our projects a reality. 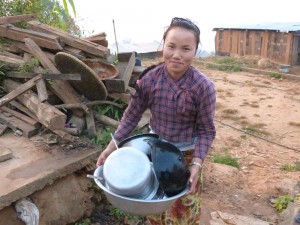 Samjhana speaks good English and has clearly had a good education.  She is a bit more savvy of the western ways and can be found on Facebook. She tells me much about the village and how all 130 of them  lived together in a big tent after the earthquake. How it helped them to pull together and get through it. I probe further asking how she felt, she laughs, saying she was scared, “I had a baby in my arms. I just ran for the open land. The ground was moving under my feet and a kept falling.” 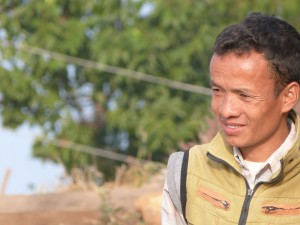 Pancha’s wife lives in a local town with his daughter and son. His wife can work there and his daughter and son are closer to the school. He sees them every couple of weeks. He is very busy with the school and the community. Having consulted with the villagers and been looking for outside help to put some of his plans into action, he is certainly glad to know Ram and to meet me.

At about 4″6 I tower over him. He has a friendly smile but is not confident speaking English and perhaps a little shy. In Nepali however he is happy to discuss everything openly with us. He clearly loves his village.

He was the first person in the village to complete his school education. 15 years ago he setup the school with the backing of the local development committee on a salary of $25 a month. He has built a school that is full of happy children. His approach is gentle and caring and you can see that has passed to the 4 teachers that work under him.

Each day he is up early to bring water to his home. He doesnt drink – he tried it once and after one cup of Rocksee he was sick, clearly not built for it.

—- So we’ve met some of the villagers of Kuber Tole Hill Village, but I think I should also say a little of Nepal Foundation’s “Man in Kathmandu” Ram. — 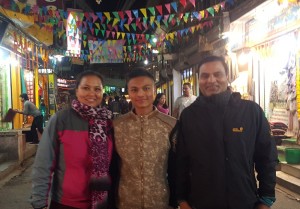 I have known Ram since 2002 when he was the organiser of my voluntary placement. Back then we were both younger, I had more hair and Ram had no grey ones (well, non hidden by hair dye anyway!).

While I was here Sarita gave birth to Roshan. It’s frightening to see the baby grow into such a big lad. All of them a wonderful people and have been such kind hosts. But it’s about Ram that I would like to say more…

He is the second youngest of 7 children. His parents had little and had to share the little they had amoungst the 9 of them – young Ram was often short of food and would go the bed hungry. His parents believed then that more children would bring them prosperity but in reality it made life harder. Having had little as a child he wanted to help make sure other children had more. 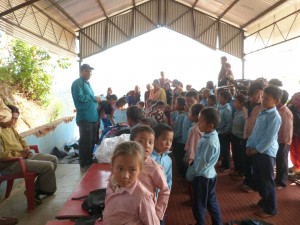 He became a teacher and a good one I’m sure. Later, with good English on his side, he found better paid work as an organiser of volunteering placements and working arranging treks. So, he would see much of the country and meet many people. As he built up a network of connections he knew many of those visiting wanted to donate something to charity. So the sponsorship scheme was born and has grown to 14 children.

After the earthquake struck and thankful of his families safety he went out to see who else he could help. Having worked on relief operations for a number of weeks (bringing dead bodies out of the rubble) and seeing all the devastation first hand he wanted to do more. Now Ram works full time for the charity, on a modest salary. He hopes to make a big and lasting change.