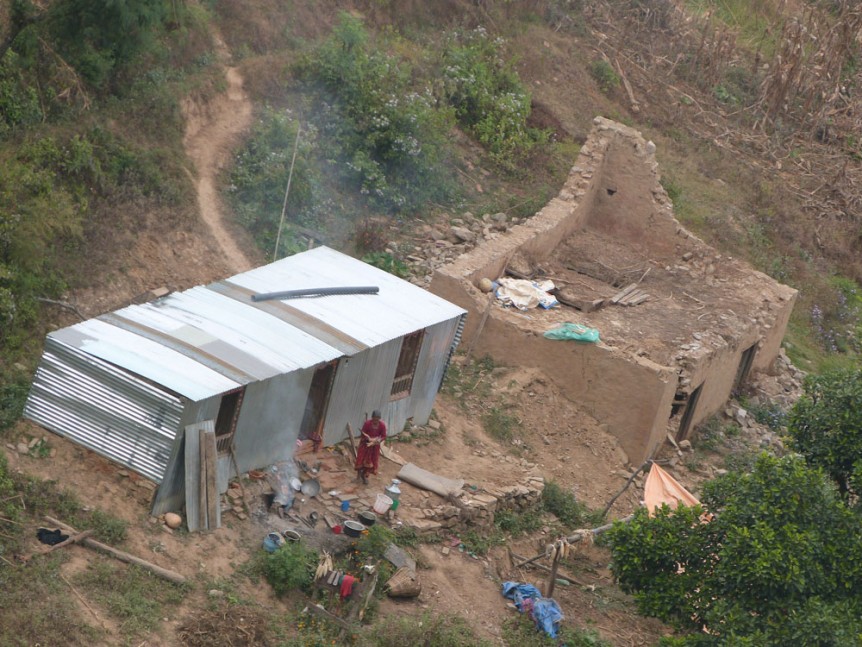 In the aftermath of the earthquake the Kavre region did not hit the headlines as much as its neighboring Sindhupalchowk region – it is smaller and the death toll here less. But the Kavre region and the Tamang people who live here have been hit so very hard. Despite this the response from the large charities and government has been little. 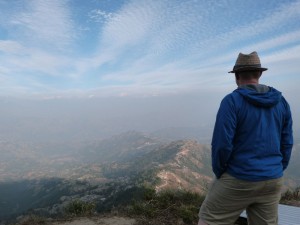 The Tamang people we met are sincere, forthright and very innocent people – they will tell you the truth in every answer, even to the detriment of their own cause. We immediately liked them a lot.

So it is through this region we take our next expedition of exploration to understand the area more and to see what else we can learn and what places we discover.

The more we explore the more we see the hardship here. Barely a house left standing, landslides down roadways and often we hear the words “Pani, Chaina” (“Water, No”). Our 28km hike takes us through the heart of the region, up mountains and down into the valleys. Some places have some relative wealth and they are able to rebuild. In other places that is not the case, and so often the key to the wealth is water supply.

The earthquake didn’t only destroy houses and buildings, it also caused a lot of the natural springs to move or dry up. A village that before was thriving with many crops and animals before could now find they had nothing.

We pass villages that have lush green fields with many crops growing, then another village with baron fields turning to dust. We hear how many of the villagers leave for work either in the brick factories on the edges of Kathmandu or to the middle east or Malaysia as a cheap labour force. With water they have some work and some income. Without it they have nothing here.

Lets look at some of the villages: 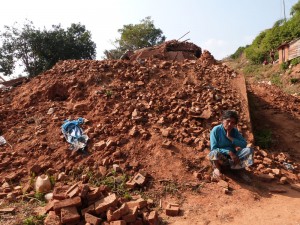 Gaire Gaon – Initially we see along a road every house is turned to rubble. Across the dirt track there are a number of tin houses built from the remains.

We meet the locals, one man telling us how he lost his parents, brother and nephew. What they need here is new houses.

Walking further down we see it isn’t a small village but the edge of a town. There is a large pipe we assume carrying water through the town, until we find the end of it laying dry. The secondary school here is a shambles. A place we note that needs further research. As we talk to villagers further along we hear that these people are so very much more in need than them. 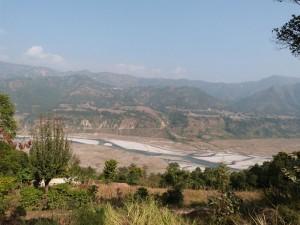 Carrying further down we get our first look at the river that defines this area. Much has been discussed about the big water project that should provide drinking water to the growing population of Kathmandu. Across the valley is the Sindhupalchowk region, and in the valley basin the market town of Chaudhary.

Further down we find Danuwar village perched on the edge of the mountainside. The same signs of a village in need of our help: dry fields, 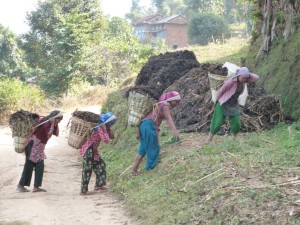 houses destroyed. Talking to some of the women working bringing manure up to the land Ram asking what they need. The children at the primary school don’t have school bags. Training in a craft for the women would bring an extra income and here there is an opportunity to make candles. With some basic training and a little investment this would help the community to bring in some extra money. Another project which we feel would be of great benefit. Ram gets some contact details and we move on…

Not every village has such a hard time. There is some good work being done by charities and next we find two villages that have had some significant help.

The Chaudhary Group has built homes for villages. They pay a part and the villagers invest the rest. A second village we find two German’s working hard building new homes with the Green Helmets charity. Here 53 new concrete homes are being built. 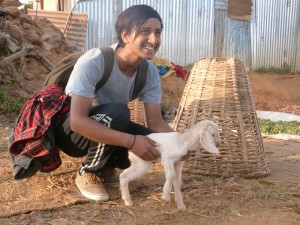 We pass a man who has 4 baby goats, born just minutes before. Later a man who has a chicken that Ram thinks looks pretty tasty – we buy him as a treat for young Sanjay on his 19th Birthday.

We reach Kuber Tole via the town of Chandeni. At the junction of 4 villages this is place should be thriving but the villages are suffering and the town is suffering too.

From here its just a 30 minute walk to Kuber Tole where we spend the night. A meeting with all the households to discuss the water project. I explain my role and we discuss what we would like in return. The highlight for me is the moment Ram translates my question, “would the villagers like a cleaner village?”. The resounding answer came in a chorus “Yes”. We ask every house to start a collection . The next morning our trail is scattered with the odd fire where litter has been burnt. There is a lot to teach still about waste management but it is a start.

We are joined for the hike on the second day with Ram Maya who wants us to visit a village on our route.

In Mahadevsthen lots of villagers are sitting around. Dry fields and no work. Ram makes a note of the name and we will find out more but we cant spend too long everywhere – we are now over 23km of hiking in an we are all feeling the effects. 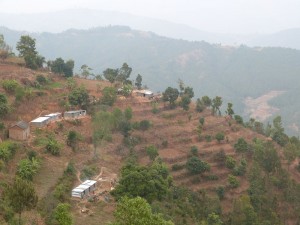 The village of Anakot that Ram Maya wanted us to see is perched high on the top of the next ridge. As she suggested it has many issues. Half the population has been given an advance (to buy a tin roof) from a Kathmandu brick factory – in a few days the bus comes to collect the villagers to work and live in the factory. Over those 6 months of work the children are out of school, the village has lost its residents and the community is split.

There is no water here. The natural spring that had fed this village for years has dried after the earthquake and the new spring is further down – making it impossible to keep the fields irrigated. It is a barren land. So many people have died here, so many have left to find work elsewhere – these are the communities we want to keep together. With water they would have work, a life together and freedom to work their land. The children could go to school, through education they can build a brighter future.

Here they have a plan for building a water system, costing around £10k. Ram will investigate further. 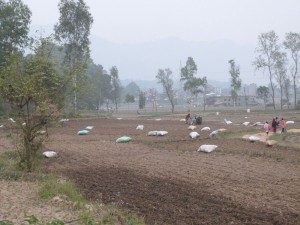 Our trip comes to an end as we walk into Tamagat in the valley basin. Irrigation everywhere, people busy with work, money and rebuilding go on everywhere.

What have we learnt from this expedition: water is key to so much of life here, the people want to work to rebuild their communities, and Sanjay doesn’t like chicken head for dinner (as is the custom)!